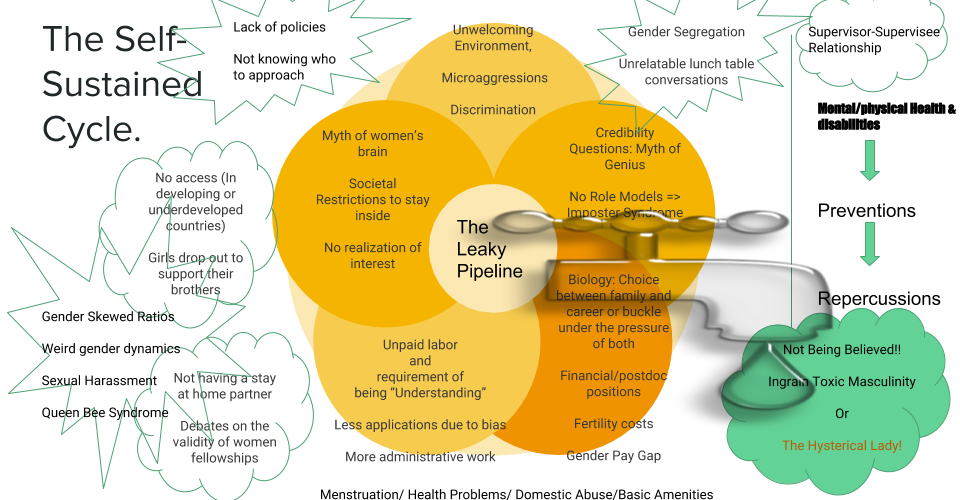 Hello everyone. Today, I have been talking to a collaborator of mine regarding the complexity of factors that adds to gender skewness in the workplace. Often I have attended workshops, conferences and events where participants focus on one aspect which leads to the “leaky pipeline” of academia, so to say. Now, just to put it here, I am not a big fan of the phrase “Leaky pipeline” but we will come to the nuances of language in another post.

Last year, I was invited as a Key note speaker to the WomenBeing Conference in Edinburgh where gender studies students presented their work on various topics ranging from how drug abuse rates are different in different genders, the rate of microaggressions faced by various genders, the power distance between supervisor and supervisee relationships, statistics on how race/gender/age determines who are victims of certain kinds of behaviours to domestic abuse and a variety of other factors. This was a wonderful conference full of great ideas and statistics, however, one thing which leapt out to me was how often we miss the intricate complexity of this topics and the interaction they have with each other. For example, a woman who is being abused at home and has a baby, and is also on her periods and in a lot of pain, would be highly prone to having low self esteem. If an interaction happens with an uncooperative boss, that puts her at a risk of aggressions that she would otherwise be able to handle better. This would inevitably lead to depression and anxiety, low performance and then become a self fulfilling prophecy of certain genders low rate of success if she drops out.

I have often believed that the metrics by which we measure success in our workplaces around the world are lacking in their depth of understanding the feedback loops of how each seemingly separate cause feeds into another one and eventually comes back a full circle. This is also the same principle as to how the rich become richer and the poor become poorer, not withstanding how “hardworking” each of these individual people are.

It is common knowledge that once you have one house, you can get loans to build more. And some more. You can rent the rest of the houses out and make more income and so would have a lot more property to show as collateral for your next loan. A tiny difference in the initial amount is often what separates an escalation of wealth from a downward economic spiral. Many other micro-factors add to this. We have all heard the age-old adage of “The First Impression is the Last Impression”. Now, let us compare someone who has money to splurge on “Smart office wear” and is not irritated by not eating a healthy diet, has enough money to spend on child care or has a live-in spouse (often female) at home and so is not distracted at meetings and is able to commit to his work fully while looking dapper to someone who has to juggle multiple shifts, does not have enough money to splurge on a comfortable work wear and has to rush back home to take care of the baby. The strain on their face would show, making people view them as less trustworthy and motivated. This would eventually lead to loss of opportunity. And such examples can be many and varied.

However, in the conference, I decided to take the opportunity to sketch an interaction slide showing the interaction between seemingly disparate topics and how each of them eventually add to the Leaky Pipeline of Academia. The problem is not motivation which can be easily proved by a multitude of statistics. The problem is the lack of proper infrastructure and the delegation of microaggressions and unpaid (often emotional among others) labour onto certain demographics. Here is the slide which provides a (incomplete) list of many tiny details which add to the low percentage of women in high positions.

The conclusion here is that there is an intricate relationship between poverty, comfort, economics, brain power, psychology which overlap with gender, race and privilege. I will pick small topics and go on to talk about these in more detail in my future posts.

So, I am thrilled to be representing Sussex tomorrow at the Equality in STEMM conclave at Amsterdam as part of the Equality and Diversity Group. In the light of that, here are some amazing slides I made showcasing all that Sussex is working for. ❤ Let’s all move towards building a more inclusive STEM!